A high mycotoxin contamination is expected in wheat, increasing risk for piglets 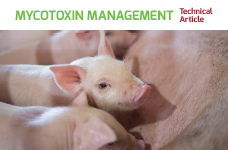 Deoxynivalenol, a concern for piglets this year

Mycotoxins are secondary metabolites that are produced by toxigenic fungi. The level of contamination in grains varies from year to year and depends on the area climate, weather conditions and on agronomic practices. Analyzing a crop just after harvest can help to plan how to use it and which groups of animals it can be fed to in the case of high levels of contamination.

Adisseo, in collaboration with Syngenta, have developed a practical new tool called MycoMan Predict, which allows to estimate the risk of crop contamination before the harvest. According to MycoMan Predict 2021, the deoxynivalenol (DON) contamination of wheat in certain major exporting countries, including Ukraine, Russia (the Black Sea area) and France is high. The MycoMan Predict threshold is 600 µg/kg, which means that there is a high risk of mycotoxin contamination in these countries. Moreover, a level of 600 µg/kg is considered as a heavy challenge for the animal level; even with dilution in the formulation, sensitive animals such as piglets, can already be impacted by as little as 150 µg/kg in the finished feed. 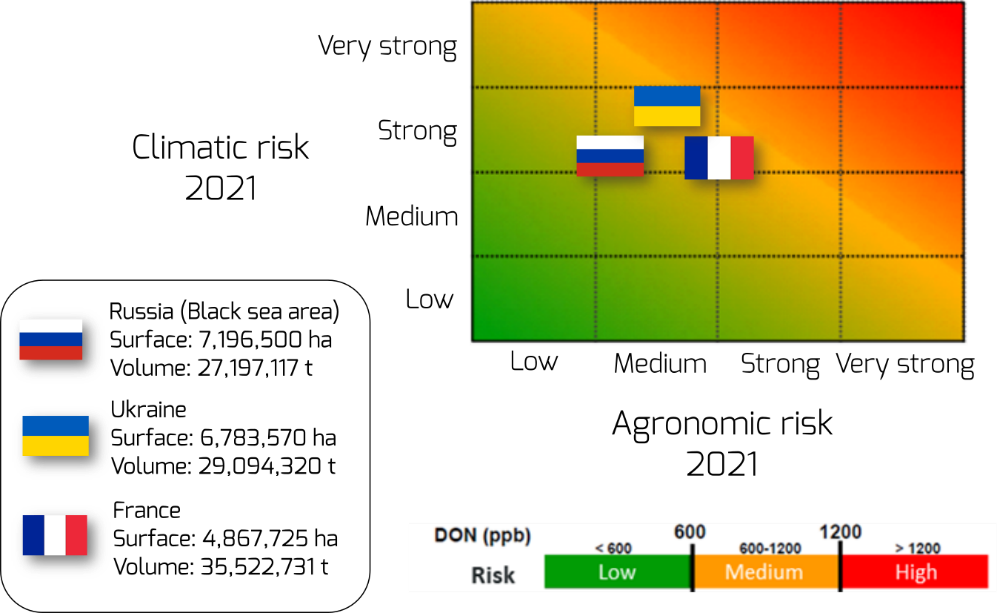 Deoxynivalenol, a tricky mycotoxin to deal with

What would a high level of DON contamination mean for piglets? Swine are the most sensitive among the animal species. Many types of mycotoxins, including DON, can cause negative effects on the health and performance of swine. High levels of DON in piglet diets can cause a decrease in the intake or a complete refusal of a feed, vomiting, digestive disorders and/or a decrease in the average daily weight gain. Piglets are especially sensitive since their organism has not yet developed, and they are not able to respond effectively to a mycotoxin challenge.

The early life period of piglets is very important for the maturation of the intestinal tract, immune system, and microbiota development. From the moment they are born, piglets are highly susceptible to infections because of their immature immune system and higher gut permeability. DON is known to negatively impact the immune system. The immune response can be divided into two types: innate (rapid, but not specific – involving immune and non-immune cells, such as epithelial and endothelial cells, as well as immune cells, such as macrophages, neutrophils, or dendritic cells) and acquired or adaptive (specific, but slow – after vaccination – involving immune cells, especially lymphocytes). Mucosal immunity, which consists of an innate and adaptive immune response, can be affected by DON. Several studies have indicated that DON can increase the permeability of the porcine intestinal epithelial layer and affect the viability and proliferation of intestinal epithelial cells. Practically speaking, this means that low levels of DON have been shown to increase susceptibility to pathogens, reactivate chronic disease, cause vaccination failure and can be a predisposal factor for swine respiratory disease.

DON, like most mycotoxins, has a prooxidant effect and can induce oxidative stress in cells, thus causing different problems in the organs of animals. The levels of antioxidants (vitamins C, E, superoxide dismutase (TSOD), glutathione peroxidase (GPx) in the blood of piglets can decrease due to mycotoxins in feeds. Interestingly, even low level of mycotoxins is able to decrease the levels of antioxidants in the blood of piglets.

Today, there are several different approaches to mycotoxin adsorption/deactivation, but DON is difficult to deal with in pigs: it shows a low polarity (difficult to adsorb), a high bioavailability in pig intestine and, thought-provoking, is effectively metabolized in the liver to non-toxic DON-3-glucuronide and excreted via urine . It is interesting to know that binding on mycotoxin adsorbent may not be a good option for DON decontamination. Scientists from the University of Ghent in Belgium studied the adsorption of DON in broilers and found that the negative action of the binding of DON – mycotoxin is shifted to the distal parts of the small intestine, the part which is naturally most sensitive to DON. This is particularly harmful since it causes damage of the villi’s, thereby decreasing the absorption of dietary nutrients, which could then become the prefect substrate for the growth of pathogens. This is why a complex approach, based on the stimulation of a natural bio-inactivation process in the body by the liver, intestinal cells, microbiota etc., should be applied for DON deactivation in contrast to DON binding. Furthermore, the aid to immune and antioxidant systems, and organ support in piglets would help them to deal with DON-toxicosis more efficiently.

In 2021, Adisseo has evaluated the effect of a natural contamination of DON in nursery pigs. A total of 18 barrows and 18 gilts, weaned at 27 days of age, were allotted to 3 dietary treatments (n = 12), on the basis of a completely randomized block design, according to sex and body weight. Each pig received one of the following 3 diets for 34 days: 1. M- diet with corn DDGS containing minimal amounts of detectable DON; 2. M+ diet with corn DDGS contaminated with DON to supplement 2 mg/kg DON; 3. UP diet M+ + 0.2% Unike® Plus.

The M+ diet compromised the average daily gain (ADG) by -11.7%, and the average daily feed intake (ADFI) by -5.9%, and thus lowered G:F ratio by -5.6%. UP restored ADG by +4.2% and G:F by +3.0%, compared to M+.
The M+ diet affected the intestinal health of the animals by modulating the redox parameters (GSH/GSSG and MDA), inflammatory (IL8) and immune response (IgA). The pigs fed with UP had a higher (P=0.036) globulin concentration in the serum, one of the major constituents of serum protein. The supplementation of Unike® Plus to the pig diet also led to an increase in GSH/GSSG (P=0.045) and a decrease of Malondialdehyde (MDA) (P=0.037) concentrations in the jejunum mucosa. IL-8 and IgA were also numerically decreased in the UP group, compared to the M+ group.

Table 1. Performance and metabolism parameters of the overall nursery phase of piglets

The harvesting time, with its “suspense” related to mycotoxin contamination, is fast approaching, and we know large European exporting countries need to pay special attention to DON in wheat. This mycotoxin, due to its low polarity and high absorption, needs special attention and cannot, even should not, be treated with simple binders. Solutions that have a complementary approach to adsorption, bio-inactivation, support of immunity, organs and antioxidative protection seem to be more promising to offset the negative effects caused by mycotoxins.